Archive for the House Locks Category

Today i attended a property in Romford. The owners required the locks changed . The front door was a double set in which i changed the cylinders and adjusted the doors so the doors would lock. The next was an old metal door and the last was a reasonably new upvc door. 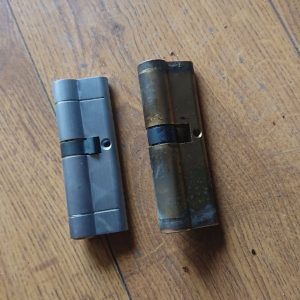 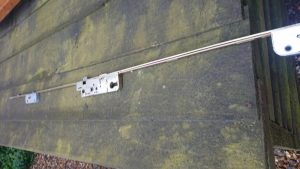 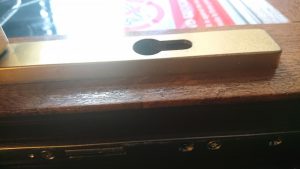 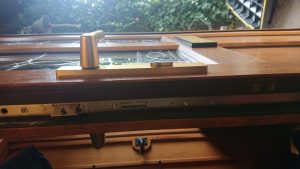 I was called to a property in Chadwell St Mary near Tilbury . The inside handle was rotating and not working the mechanism . I removed the handles to find the section where the spindle goes through had broken up. The mechanism was made by GU and the older style Gu centre case in no longer available apart from some very bad copies   . I ordered the new style GU mechanism which went straight on and only had to move the centre keep i also fitted a new cylinder so every componant is new. 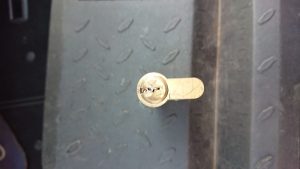 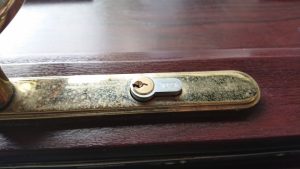 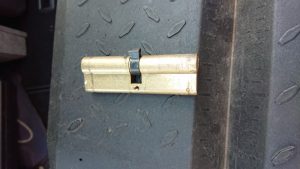 Today i attended a property where the key had snapped in the cylinder, i checked the cylinder to find the cam had moved round so the key cannot be removed when the door is looked. I informed the customer of the difference of where the cams should be when the key is removed . I fitted a dual finish cylinder and asked the customer to try the door inside and out and she was very happy with the quick services and gave pj locksmiths a good review on facebook

I was called to a property where the customer had opened his door and as he took the key out the cylinder fell to pieces. I arrived removed what was left of the cylinder and replaced it with a new one so the customer could leave the property. 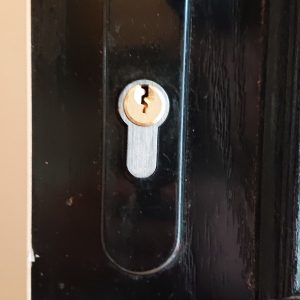 Today a customer who I have been to on a few occasions asked me to have a look her sliding door. When I got there the handle was tied to the curtain tie holder with a belt as the door would not lock. I removed the belt tested the lock in the open position it worked Once the door was closed it would not lock then  I shut the and tilted the top towards the frame and it locked  the rear roller had dropped. On the van I have a long screw drive that reaches tbe roller I adjusted the the rollers and the door locks 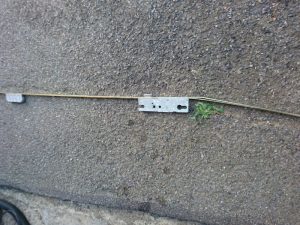 Yesterday I was called to a property in south Ockendon where the owners were away and friends were looking after their dog.the front door would not open as easily as it should. I arrived to find the latch was not retracting when using the key from the outside. I put a solid spindle in to make it better. I informed the owners of the problem and the price of a new lock system. The owners wanted me to fit a new system as the house was up for sale. I ordered the new system it arrived the next day I fitted it. The friends checked it all was good.

Today I was called out to Brentwood to a customer who had lost his keys whilst out shopping. He was able to get in but was unhappy knowing his keys were out there somewhere and someone may have picked them up and followed him to see where he lived. As a precaution I changed the night latch barrel or Yale lock as it is known and the mortise lock or Chubb lock. The customer was happy knowing that if someone had picked up his keys they could not get in his house 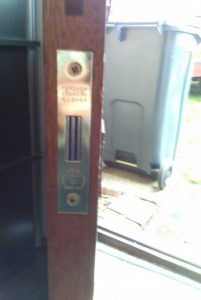 Today I have had a customers who requires extra security on his front door as he is applying for a shot gun licence. I have fitted an ERA 5 lever British standard insurance approved lock. I also checked the back door and windows to make sure they are all up to standard. 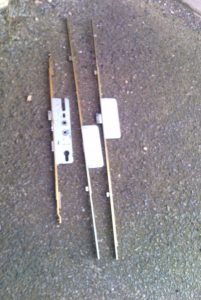 Had a customer in Aveley with a faulty door mechanism. This was no longer available. I was offered an alternative which fitted in place of the original with no cutting holes and it lined up with old keeps on the frame so no holes on show there. With new handles and a new cylinder the door latched and locked like new with no unsightly holes

A customer couldn’t get in her flat in South Ockendon as the snib had dropped down.she rang another locksmith who said he would have to drill the cylinder then smash the lock off.Then he would have to fit a new night latch for £120.With the correct tool I lifted up the snub turned the key she was in all for £50 no new lock required 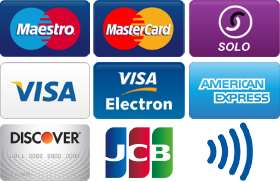 PJ Locksmiths
5.0
Based on 25 reviews

Jake Huckle
16:13 25 Apr 20
Called PJ Locksmiths on a Saturday afternoon and was told he could come straight to me, with in 20 minutes he arrived and gained entry to my property. Great service.

Ilona Plumb
06:46 19 Feb 20
Such a professional service...quick response locks fixed in no time..good price and friendly service...thank you

Elizabeth Taylor
14:36 02 Feb 20
Thank you very much quick response to get me back in my home. Excellent value. Highly recommend, lovely man

ARM 1886
19:20 14 Oct 19
Lock became very hard, where key wouldn't even go in to lock door. Called PJ Locksmith in panic mode. Guy was very helpful and advised to try WD40 first & if this doesn't work then he will come out to repair. Tried WD40 and it instantly fixed the issue. Thanks mate. Saved me money!

mattdoestimetrialling Diary
19:00 16 Feb 19
Paul was very knowledgeable and was always quick to reply and come out to help us sort our lock out. Even went the extra mile and changed the barrel for free when we had all the gear box and roller pins replaced. Cheers Paul

Jason Duncan
10:55 16 Feb 19
Exceptionally quick response, very nice guy to deal with, got me in the house in no time at all, diagnosed the problem with the lock and rectified. Also gave good solid advice going forward. Well recommended.

John Venables
12:09 14 Feb 19
Brilliant Service. Rang at 10pm with a broken door lock which turned out to be a bit of an obscure make. Paul was able to identify from a photo and locate the part. All was sorted very quickly. Very very happy with the service. Definitely recommend and would use again.

Medar Moroglu
11:18 23 Sep 18
The best locksmith in town! Arrived within an hour of our call, reviewed our locks and guided us on the locks that needed changing and the locks that didn’t. Then gave us general security advice on how to protect our new home. Went above and beyond! Thank you PJ Locksmiths!

Karen Wordley
12:22 16 Oct 17
Paul saved the day! I called PJ Locksmiths and he came within 15 minutes. Quick, efficient and reliable service. Would recommend him every time!!

Christine Stock
08:26 16 Oct 17
Paul gets here fast , sorts the job immediately , gives you advice , He is well mannered and friendly . I would not go any where else fantastic service !

Laura Wing
21:44 13 Oct 17
Super fast and couldn’t be happier with the service ! Very fair prices and a very nice guy. Will recommend to family and friends.

New handles fitted so owner can can shut the door

Replacement keys for cabinet in a dentist

3 euro cylinders changed on a property in Grays

New handles in a new development in Harold wood al

This evening i was called to a property in Harold

Fitted a new section of tilt before turn mechanism